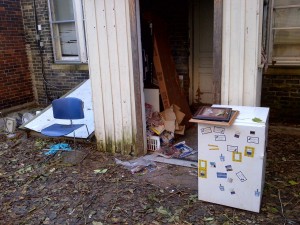 Those who provide services to people experiencing homelessness know that the Safe Haven drop-in centres have closed this year (although the Men’s Mission maintains a parallel drop-in service at their same site).  This, as with any service change, has not been very well received in the community.  At a time when resources were stretched, the loss of any service (particularly one that was accessed 113,700 times per this report, pg 331) hits hard.

So, why were they closed?  Well, there were a number of reasons that they might not have been optimal, but the primary reason would be that the funding is being reallocated.  This funding is now being utilized for re-housing services provided by street level workers.  The concept is spending less money on managing homelessness, and more on ending it.  This is a large part of what the current community plan is looking at, and is an intelligent direction.  However, the change is still uncomfortable.

The other important piece to note is that there are indeed places for people to go during the times that the Safe Havens operated.  Now, that they were so well utilized means that they fit a purpose, but there are still other places to go.  That said, it is still worthwhile for London to consider low-barrier, after hours drop in spaces for people, particularly those using substances.

2 thoughts on “What Happened to the Safe Havens?”