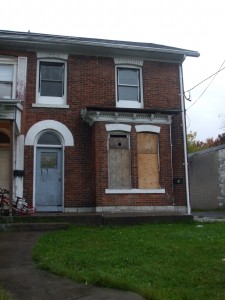 I have been confronted in the last week by several incidences of the us/them dichotomy.  That is, homeless people are ‘them’, the undersirable other, that which we are afraid of, and that which must be eradicated.  We are ‘us’, the upright citizens, those who are employed and spend money in retail stores, those who must be catered to.

Here are a few examples.  Downtown London is working on creating a master plan for the core, to make it a desireable place to work, live, and seek entertainment.  Part of this process has been a discussion board on a Facebook group.  Two of the commenters noted the following: “Also, make panhandling illegal… The people not just sitting on the street with a hat, but actively walking in front of you and asking for money seems to have increased lately, and this makes me feel less safe downtown.”  And, “The first thing I would do, is get rid of the loiterers and panhandlers. I would have a more visible police presence to deter these harassers.”  At the same time, an article came out today expressing that city council is looking at strict rules as to where methadone clinics can be located, with a quote from re-elected councillor Steve Orser “(The addicts) are the ones who decided to go on the stuff in the first place. The rest of us shouldn’t suffer from it.”

I won’t go into the specifics of how these commenters are misinformed or simply unaware of such things as the Safe Streets Act, London Police Department foot patrol, and the nature of addiction.  What is more important here is the two part narrative of there being people who are unwanted in our city, and how to change that.  It’s amazing how quickly we forget that these panhandlers and loiterers are people first, people who are experiencing some of the greatest suffering that humans can experience.  These are people who have meaning, who are beautiful in their own way.  Yet, we just see the circumstances, and how they impact negatively upon us (one commenter on the Free Press article referred to people in poverty as ‘ocular trauma’).

And, it’s very short-sighted to see the solutions to this as driving people away, through by-laws, ticketing, policing, and harrassment.  If we truly want a desirable city, and want to have a city where poverty is not evident, then we need to confront the root causes of poverty.  People don’t panhandle because it is their desired profession, they panhandle out of need.  Let’s address the need, so panhandling is never necessary.

2 thoughts on “The Us/Them Dichotomy”