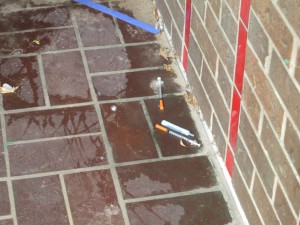 The majority of drug overdoses leading to death occur with other people present.  People are not calling 911 to respond to the situation.  The problem?  Others present at the time of overdose are concerned that they will be arrested for drug use or on prior convictions.  And, unfortunately, this is a well founded concern.  A community member recently told me of an experience of overdosing, and when his friend called 911, police and ambulance responded and the friend was arrested on a curfew violation.

One response that has been explored is to better equip peers to respond to overdoses, particularly narcotic overdoses.  We have explored making Naloxone (Narcan) widely available, but there are many barriers.  Firstly, it is prohibitively expensive with Narcan costing $180/dose and the generic costing $400 for 10 doses.  These also have a relatively short expiry date.  Secondly, there is risk in administering it as it only comes in an injectable form currenlty, with a nasal spray just now being trialed in Vancouver.  Thirdly, a prescription is required, and there are legalities around delivering someone else’s medication to them while they are unconscious, even if they have a prescription.

A second response, which seems more promising, is to address police attendance to 911 calls for overdose.  In Vancouver, they have a policy where police only respond in cases of concern for safety of the public, and if they do respond, it is solely to support the urgent medical need.  The initial announcement of this drug overdose policy can be found here, with the policy itself available here.  If such a change was made in London, and community members could be educated of this, it would likely lead to the calling of 911 and prevention of many overdose deaths.