Warning: count(): Parameter must be an array or an object that implements Countable in /home/customer/www/abeoudshoorn.com/public_html/blog/wp-content/plugins/subscribe-plugin/subscribe-widget.php on line 215
 August | 2015 | Abe Oudshoorn's Blog 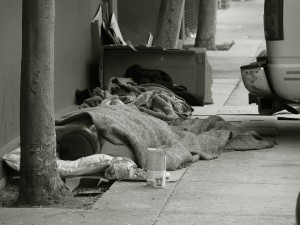 The criminalization of homelessness is a scourge of societies across the globe. The general thought behind it goes something like this: People and/or their behaviours are anti-social and/or bad for our neighbourhood(s), therefore we will make criminal certain acts that we deem to be unwanted. This at face value makes sense, as it aligns with some of the core tenants of a justice system (ie. to get along as a society we need to enforce certain standards of behaviour and interaction), but let’s take a quick look at how this plays out in practice.

The overwhelming majority of people experiencing homelessness live in abject poverty, for example in Ontario most surviving on Ontario Works receive approximately $7,600 per year. With insufficient income to meet the most basic of needs, people turn to alternative means to supplement their income. This can include such activities as survival sex work or panhandling. Making these behaviours illegal then becomes a downstream response that does not alter the root issue of insufficient income. The punishment of these activities, such as ticketing those panhandling, rather adds layers of marginalization, making it more difficult for people to subsequently exit poverty and homelessness.

“Solutions” to panhandling such as this one out of Albuquerque http://www.koat.com/news/311-not-a-247-solution-to-panhandling-problems/34627678 are only band-aids or worse unless they address the root issue of inadequate income.

People need to go to the bathroom, shower, and be intimate. Those who are without a home often have nowhere else to perform these functions but in the public sphere. This article from New York states it well, “unforgiving policies against low-level violations pushes people into the criminal justice system” http://www.cbc.ca/news/world/new-york-public-urination-debate-tests-broken-windows-theory-of-crime-1.3170821. Citing someone for public nudity or public urination who is trying their best to relieve themselves out of sight, but who has no other option, is nothing other than cruel.

The cruelest and most insidious of policies are those that are simply intended to drive away certain people from certain communities. This can be as basic as removing benches from public spaces, to laws that criminalize such things as lying down on a sidewalk (see: Tampa and Honolulu http://thinkprogress.org/economy/2014/07/16/3460553/homeless-criminalization-report/). Fort Lauderdale makes it really awfully obvious what they are going for in making it illegal to have personal possessions on public property. If you want to get really angry, read this article about NYPD police taking pictures of “quality-of-life offenses” like being homeless in public http://nypost.com/2015/08/10/cops-are-taking-pictures-of-bums-and-posting-them-online/.

These particular laws are the most cruel as they are based on nothing other than protecting the public from seeing someone in poverty. There is no harm being committed, and the result is absolutely nothing other than perhaps forcing people to move elsewhere. Unfortunately, this is exactly the goal. It is completely dehumanizing, heartless, and short-sighted.

However, with all that said, I would like to go out on a limb and suggest that I do support some homelessness-related laws that have been deemed by others as anti-homeless.

There has been much discussion about laws around providing food to people experiencing homelessness. This article from Mother Jones subtly highlights that there are differences in laws around public food sharing: http://www.motherjones.com/politics/2014/11/90-year-old-florida-veteran-arrested-feeding-homeless-bans. Some laws are explicit about not providing food to to anyone in any way in public, whereas others stipulate criteria around food sharing safety. Most Canadian cities, with a strong public health system, fall under the latter. I believe that just because people are experiencing homelessness, it does not mean they should be provided with food that does not meet public food safety criteria. Now, I would note that this is said in the Canadian context where we don’t have individuals actually starving to death. My own research has shown that there is actually not a food access issue in London around poverty, but rather a food quality issue (as long as one is not facing mobility issues).

So, I believe that there should be laws against public sharing of food that does not meet food preparation and sharing safety criteria. If people are truly passionate about providing food to those experiencing poverty, then they can follow the simple criteria required to do so safely, or volunteer with an organization already doing so. Ignoring these standards is actually in itself dehumanizing.

I would make the same assertion around housing standards. Whenever there is a crisis in London that leads to people being very publicly de-housed, I see suggestions of solutions like tiny homes, tent cities, or shipping containers. When someone dies in a fire in substandard housing, some say that at least this housing is better than shelters or the street. Again, I believe that this perspective is based on the flawed logic that the housing standards that are good for me are perhaps too good for others. Instead, I believe that we have the resources in Canada to provide safe and adequate housing to all. We DO NOT want to return to the days of the slums and say that this is good enough for us (or for others, as the case may be). Rather, we need the political will to put the resources we have to work in order to provide adequate housing that is: safe, affordable, permanent, supported as needed, and of the individual’s choice.

This leads to the current, and possibly most controversial, concern: urban camping. 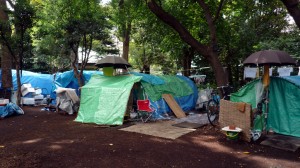 Abbotsford, BC is in the midst of a court case where the B.C./Yukon Association of Drug War Survivors or fighting for the right of people experiencing homelessness to camp in public spaces. In this article http://news.nationalpost.com/full-comment/tim-richter-fights-for-the-right-to-camp-will-harm-more-than-help-homeless-need-a-home-not-a-tent Tim Richter of the Canadian Alliance to End Homelessness captures well the tension of the issue. When it comes to the goal of ending homelessness, meaning helping people find home, a tent meets little to none of the criteria for home. In fact, a tent might be a dangerous, even harmful place for someone to live, even temporarily.

Now, this issue is a little more complex because unlike the food issue, the lack of housing alternatives is more of an immediate crisis with many people having simply no other option in the moment. However, I would again highlight that we should not settle for inadequate because our system is currently poorly funded and/or designed. Rather, we should create a context where no one has to choose urban camping as an option. I don’t believe that we should fine homeless people in the interim, but neither should we surrender to unsafe housing alternatives.