Warning: count(): Parameter must be an array or an object that implements Countable in /home/customer/www/abeoudshoorn.com/public_html/blog/wp-content/plugins/subscribe-plugin/subscribe-widget.php on line 215
 February | 2015 | Abe Oudshoorn's Blog

A Tim Hortons worker pours water on a sleeping homeless man in the middle of winter.

A London Free Press reader in the comments suggests killing refugees being screened for Ebola.

My students speak of nurses suggesting patients with conditions contracted through intravenous drug use be left to die.

A man murders three neighbours over a parking dispute (and possibly motivated by hate).

How readily we forget how tentative is our own humanity. In de-humanizing others, we surrender our own humanity. I recently read “Beloved” by Toni Morrison. In a story of an escaped slave who murders her daughter rather than having that daughter returned to slavery, I was struck by the true story on which it was based. Margaret Garner was not initially charged with murder of her child as the law that allowed her and her daughter to be taken back into slavery as possessions, prevented a conviction of murder. Yet slavery, in defining African Americans as less than human, made us all inhumane. In the words of Booker T. Washington: “You can’t hold a person down without staying down with them.”

Those experiencing homelessness are fully human, fully valuable, and fully deserve our respect and kindness. Any time we choose to take away from this, we are giving away a portion of our own humanity, value, and right to be respected and treated kindly. 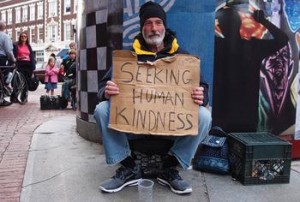