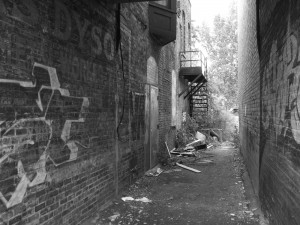 You may have noticed that I use the terminology ‘people who are experiencing homelessness’ rather than saying ‘homeless people’, or ‘the homeless’.  The language we use is important, as we know that language structures our understandings and social relations.  The terminology ‘people who are experiencing homelessness’ signifies two things: homeless people are people first, and for most, homelessness is a temporary experience.  In healthcare, we are trying to move away from saying ‘diabetics’ to people who have diabetes, or ‘cripples’ to ‘people who have been crippled’.  Similarly, we should not label people as being their housing status, but rather recognize that this is just one component of who they are.  Additionally, for the vast majority of people who are homeless, it is a temporary experience, and for most of those, it is for less than a year.  Therefore, using the language of ‘experiencing’ will help us focus on remaining hopeful for positive changes in peoples’ lives.

This article from the NY Daily News talks about a recent study being conducted by the Department of Homeless Services in New York City.  In a nutshell, the city is trialling a new program called ‘Homebase‘, which uses case management and the consolidation of services in an attempt to better serve those who are on the brink of homelessness.  Of the 7,000 plus individuals who applied, 400 were chosen for the study, with 200 accepted into Homebase, and 200 not (ie. control group).  Those who were not accepted into the program were given a list of 11 agencies that provided the equivalent services, but not with the case management and consolidation of Homebase.

So, you can see why the Department of Homeless Services would have this study approved on an ethics basis.  Homebase offers the same services that are available through other agencies, so the control group is not missing out, but they are offering it in a model that they are hoping will be more effective.  It may prove not to be more effective, or prohibitively costly, which won’t be known until the end of the two year controlled trial.  However, the problem is the optics.  To create a new service and then to randomize people to not receive it is never going to be taken well.  The argument being made by both individuals in the control group and by others who serve homeless persons in New York is that they know this intervention will be effective, and it is therefore unethical to refuse it to anyone.

Who is right?  I can’t really say.  However, what I have learned over the years is that it’s best to have a default of trusting the voices on the street than those in the ivory towers (ie. the research ethics board in this case), and would defer to those who say the program should be offered to all.