Warning: count(): Parameter must be an array or an object that implements Countable in /home/westernu/public_html/abeoudshoorn.com/blog/wp-content/plugins/subscribe-plugin/subscribe-widget.php on line 215
 Who Zero Hurts the Most | Abe Oudshoorn's Blog 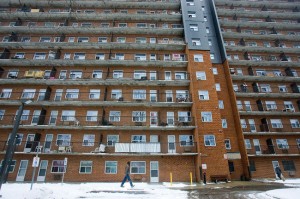 The zero percent 2013 municipal budget, and the subsequent budget cuts, will effect us all in some way by impacting many services and future tax rates.  However, the two cuts that I believe will hurt the most are those to affordable housing and to social housing.  I believe these will hurt the most as they will have immediate and serious impact on the most impoverished in our community, particularly those experiencing homelessness.

To understand these cuts, you need to understand a bit about social housing in London.  There are two municipal programs: The first is new affordable housing, which is that which  the city contributes towards, and leads to brand new units; the second is London Housing, which are the many buildings that were downloaded to the City from the Province in 2001. New affordable housing is the focus of our Housing Strategy and the target of 700 new units.  London Housing we manage and maintain, and includes some of the large developments that have gained some notoriety (ex. 580 Dundas, 241 Simcoe, Boullee St).

Recommendation 5.3 of the Council approved London Community Housing Strategy is to “Maintain the annual $2 million City investment in new affordable housing”.  This annual investment is a municipal commitment to housing that has been used effectively to leverage at a 7:1 rate investment from the province, the feds, the private sector, and the not-for-profit sector in housing.  This allowed us to come close to our last 5 year goal (2005-2009) of 1200 new units, and has us on a good path towards a 5 year goal (2010-2015) of 1000 new units.  This gives some hope for putting a dent in the housing wait-list of over 3000 family units.  ‘New units’ are created using a “toolbox approach” which can range from rent subsidies ($2400/year) to new high density units ($145,000 per unit).  This toolbox approach allows us to meet the varying needs of individuals, and also mix both short-term, quick solutions to meet the need and long-term solutions to prevent future crises.  When building, the City never builds itself, but partners with the private sector to ensure both efficiency and quality, with the off-spin of job creation.

So, what Council is proposing is an annual cut of $1 million to this fund.  This will have a severe and immediate impact on our ability to create new affordable housing, and particularly those solutions that are the most long-term (for example, subsidies are cheap but only last for 5 years, new unites are expensive but guaranteed for 25 years).  What this equates to for those working at street level is the inability to move people out of shelter and into housing.  This leaves people in both less humane living situations and in scenarios that end up costing the system more in the long run such as shelter, hospital, psychiatric facility, and jail.  This cut is a decision by our municipal government to make the homelessness situation in London worse.

The proposal in regards to London Housing (ie. existing social housing downloaded from the province that the City of London now maintains) is a reduction of $481,000.  This will be achieved by: eliminating summer day camps for kids on site; elimination of paid off-duty police patrols; reducing grass cutting from weekly to bi-weekly; reduction of twice-weekly garbage pickup to the regular City cycle (which was implemented in 2009 due to the stench from accumulated garbage in large developments).

So, we recognize that these massive developments are not the best long-term models for social housing, but we have them now, and must maintain them as best we can as a far better alternative to individuals and families staying in shelter.  To cut London Housing service budgets is a choice by Council to further ghetto-ize those in social housing.

3 thoughts on “Who Zero Hurts the Most”