Warning: count(): Parameter must be an array or an object that implements Countable in /home/westernu/public_html/abeoudshoorn.com/blog/wp-content/plugins/subscribe-plugin/subscribe-widget.php on line 215
 The Official Plan is Just a Plan (Part 5) | Abe Oudshoorn's Blog

I have heard it stated that all of this conflict could be avoided if developers simply stuck to the Official Plan.  Although I understand where this sentiment is coming from, this isn’t particularly true as although disagreement can arise around designation or zoning, it can also arise around site planning.  As I mentioned in my first post, disagreement with a particular proposal isn’t anti-development, it is specific and varied with the proposal in question.  More importantly, though, is that although the Official Plan sets the vision for development, we need to be responsive to and predictive of change.  This is demonstrated in that of the hundreds of Official Plan amendments done to date, many are done by the City itself.  To this end, I will use the site owned by York Developments at Southdale and White Oaks Rds as an example of a good change to designation. 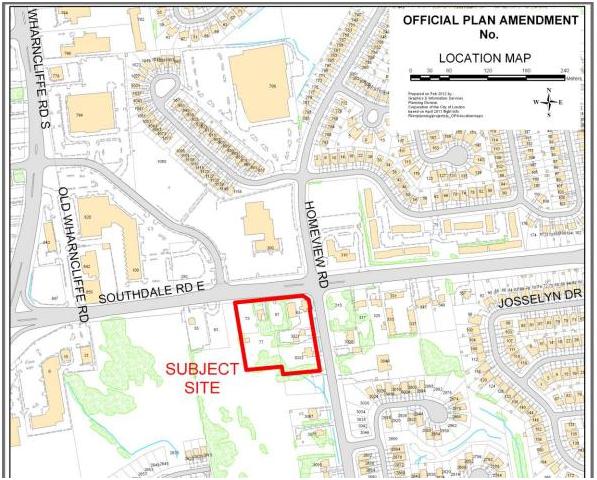 This example may surprise you, I because spoke publicly about this site, leading some to think I was opposed to the development.  However, this perspective again misses the nuance of community public input on proposals.  I was primarily concerned that staff missed the due process of circulating the correct notice to the public.  As well, in terms of the site itself, I was in favour of the change from residential to neighbourhood commercial node, but was not in favour of a special designation to include a used car lot in the back corner.  As noted by staff, there are very different parking and site needs for a commercial strip mall, and a used car lot.

The site in question is a busy corner that had some rather neglected residential and an abandoned church.  To the south of the corner, major residential development has been proceeding over the past five years.  York was interested in purchasing a number of contiguous properties, and building out the whole corner as a commercial node.  In my opinion, this makes good sense.  The residents of the new neighbourhoods will have an interest in easily accessible commercial, and the exposure and high traffic at the corner means that proposed drive-thru restaurants would likely do quite well.  In this case, to simply hold to the existing designation would mean missing an opportunity to both catch up with the ongoing evolution of the area, and set a renewed vision for the corner.

In my final post, I will get into the really messy area of development, the politics.